we have had the privilege of working with some amazing owners

we have had the privilege of working with some amazing owners

of what our clients say about us 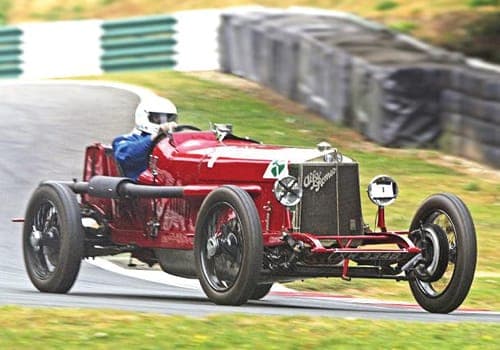 1923/4 Alfa Romeo RLTF
In 1962 I first raced the ex-Targa Florio and ex-Brooklands 1923/4 Alfa Romeo RLTF #2 reg XW 3348 which my late father acquired in the 1950s, before parting with her to me in 1965. After over half a century of constant use, and having returned from a successful Goodwood Meeting racing in the SF Edge Trophy, and in VSCC ODM events and much recent road use, I wanted to say that this wonderful original and historic car that has been such a constant thread in my life (and in my wife's as she was our wedding car) for so long, is GREATLY IMPROVED by all the work Matt at Tim Walkers has carried-out to improve the engine, gearbox, and brakes. Miracles were wrought by the Walker team when a cylinder block, pistons and rods needed changing-over in situ two days before a major event. We were even awarded "Best Car 2019" at Montlhery Vintage Revival! Many thanks to all involved. 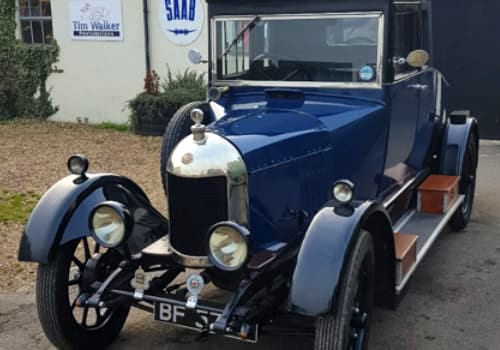 Morris Oxford
To the team at Tim Walker Restorations - Very many thanks for getting the Bullnose Morris back on the road. It is now in a state where I don’t have to worry about which bit of road it is going to take especially on corners, or worry about holding the traffic up on the next hill, or stopping when the traffic lights go red just as you get near them, although I do need help from the hand brake sometimes. Thanks to your sterling efforts, I feel that I am driving a vehicle which I am sure is safe and not the one which a year or so ago was given a MOT certificate! Thanks especially to Pete for all his hard work and advice, but not forgetting everyone else who had a hand in its restoration. I hope to see you all at Kop Hill. 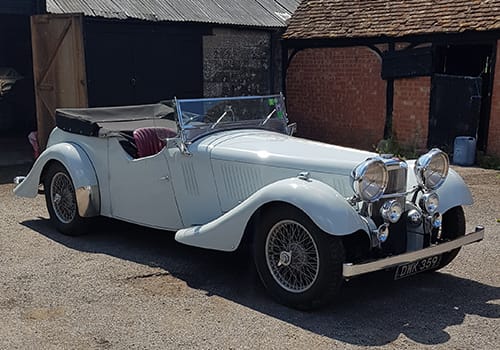 Alvis Speed 25
I am so pleased to have Siriol, my Speed 25, back in such great shape. I am most grateful to you and all the team in managing to work so well with James E Pearce to ensure that the opportunity was taken to sort out the chassis while they rectified the extensive hail damage. I know this involved stripping the whole car down and then building her up on the restored chassis and I very much appreciate that you managed to complete this in a timely way so I have only missed part of this years driving. Siriol is now in very good heart and I look forward to heading off on a few more adventures. 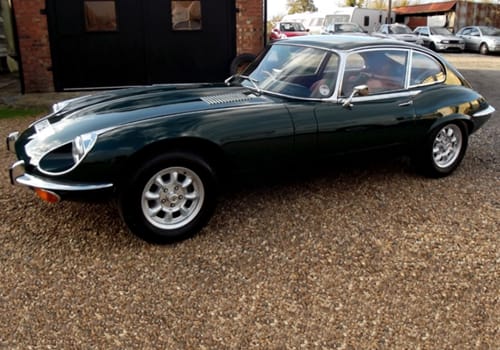 Jaguar E-Type V12
First to tell you that the E type is "Reborn". It is as though I had sold one and bought another that was 30 years younger, fitter, cleaner, more responsive and once again just a hoot to drive. I took my friend who has vast experience out for a drive and he, who is not easy to impress remarked upon the tightness of the car and the remarkable pick up. He also smiled a great deal as we accelerated from roundabout to roundabout. So another job well done and a very happy customer. 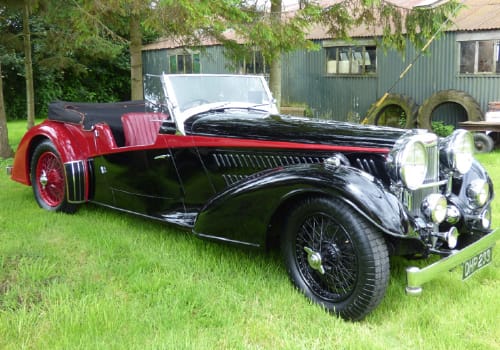 (ex-Chairman of Bicester Heritage) Alvis 4.3 Short Chassis Tourer
I recently entrusted Tim Walker Restorations with rebuilding the engine on my ex-Brooklands Alvis 4.3 short-chassis tourer. With a brief to keep the engine to original specification, Guy and the team did a superb job, sourcing many difficult-to-obtain parts and conducting the rebuild with great care, communicating frequently throughout the process. They have also worked miracles on the chassis and brakes with the result that the car is once again a joy to drive and to compete in. I would recommend this company whole-heartedly! PS we were often only a second behind the two Bugatti’s on the tests and can out-drag a low-chassis Invicta S on the hills! She’s fast for such a big girl! 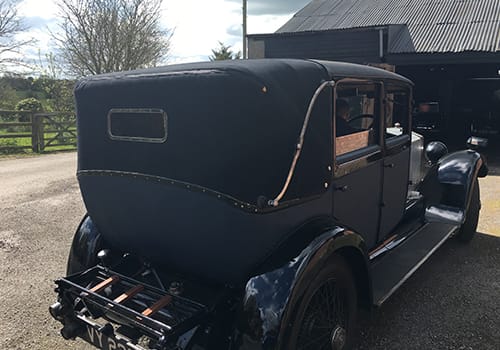 Rolls Royce 20HP
Dear all at TWR, Thank you so much for your enthusiasm and work VY 222. I know it has been a long time, but the results are good, and she is great fun to drive. I have done single journeys of about 11 miles and plan to extend that gradually so that I and she are comfortable going for an hour or so. My next plan is to get out the picnic hamper and organise the required contents. Thanks again for everything, including the bubbles – in undoing the packaging, I wondered what was the rather heavy round piece of car which you had sent until I discovered what it was. 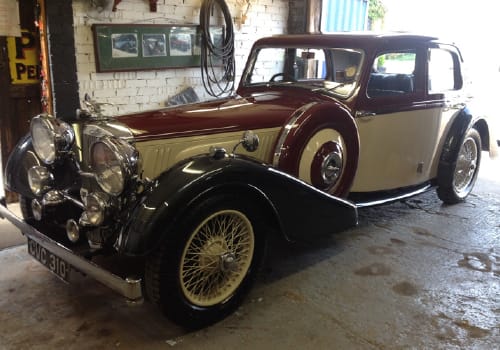 Alvis Speed 25
As a relatively recent convert to the wonders of owning an Alvis I am delighted that I found my way to the very best people to look after my 1937 Charlesworth Speed 25 Saloon. Guy and the excellent team at Tim Walker Restorations know these cars inside out and they fully understood my requirement for a car to do long distance tours in a safe and reliable car. Their careful attention to detail, highly skilled work and constructive advice has far exceeded my expectations, sincere thanks to the Tim Walker Team. 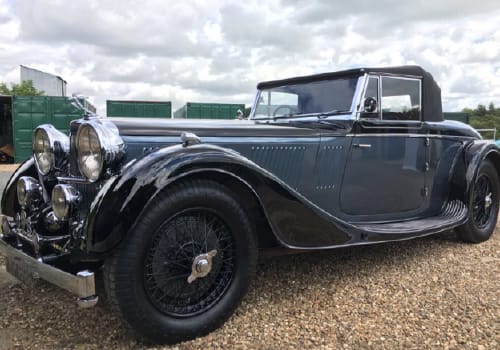 Alvis 4.3 Vanden Plas
It is rarely done but when it is, and it works it is pure magic. All were fully aware that the back end of FMP888 as originally drawn up was heavy and nothing like as nice as the rest of the shape and look. To the drawing board and the box full of ideas and of course Tim Walker Restorations. Much head scratching, metal shaping, conversations about preservation of style and then, Voila a super special result. Literally hundreds of people viewed the car at Goodwood over the weekend and we received compliment after compliment. One delightful elderly gentlemen requested that he would like to take the car home to put beside his bed! Huge thank you to the team. It is so nice to deal with a company who you completely trust and with whom you have become friends. 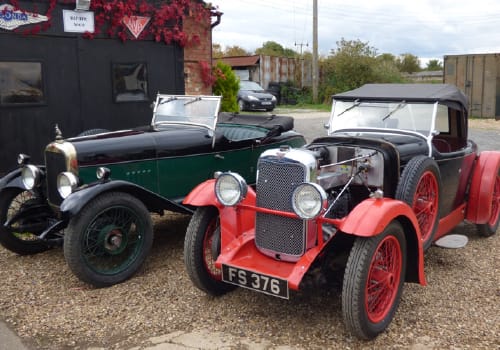 Alvis TK 12/60
A huge thank you to the team at TWR for all the work you've carried out on my late father's Alvis TK 12/60. Your patience, help and particularly advice and guidance in getting the car back on the road after 31 years has been invaluable. This was much appreciated by myself as not only had I never driven the car (or anything like it) I'd never even seen it fully complete. Although what started off as a straightforward re-commissioning exercise soon developed into a much more extensive and challenging project you have guided me through each step with much advice and help. Working with you and your team has been a real pleasure. I am now looking forward to a summer of Alvis adventures but no doubt I will be in touch again to discuss the next stage of the cars refurbishment. 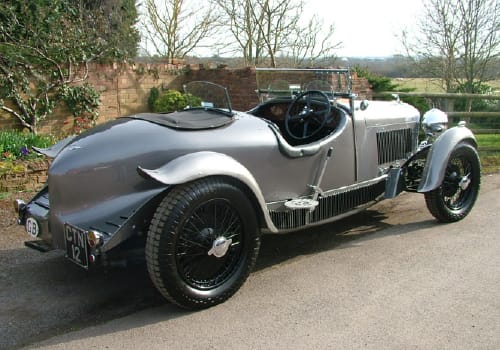 Derby Bentley 3.5L
Thanks Guy and team for the excellent and timely work on my cylinder head last week. Not only did it run like silk to Brooklands and back today, but it also picked up some BDC silverware! 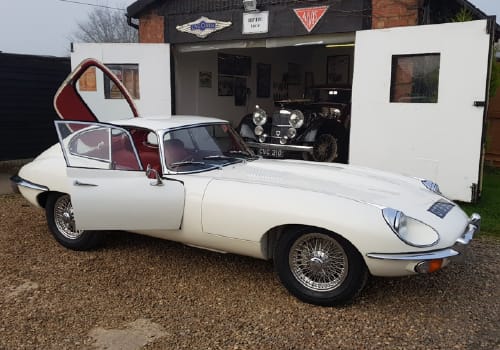 Jaguar E-Type
Thank you all for completing my 30+ year project of getting my “boxes of bits” (and lots of bits I didn’t have!) into a complete and superb running car. What a brilliant result. I think she looks beautiful and is an excellent testimony to all the skill, love and hard work put into her by the team. It feels like I have taken delivery of a new car, as in essence everything is either new or fully re-conditioned and which is something I have never been fortunate enough to do before. I now look forward to getting a few runs under her wheels on dry, salt free days to further confirm. 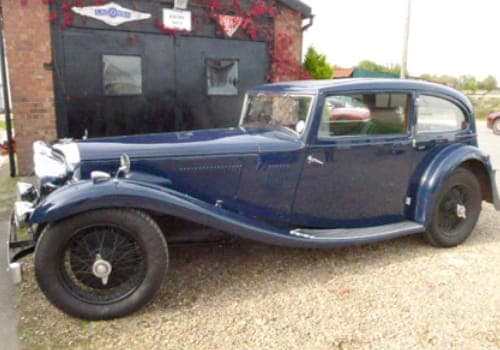 Alvis Speed 20
During 2016, I limited outings for my SB Speed 20 due to an appalling transmission vibration, steering that without constant correction would head for the nearest ditch, and a lack of urge that gave milk float drivers ideas above their station. The car sulked in the garage over the winter, and I ignored it. Eventually common sense returned, and I decided that I must find an outfit. My hunt led me to Guy Walker and his team at Tim Walker Restorations, and a visit and tour of the workshops convinced me that they could solve my problems. Each problem was dealt with separately, and sympathetically. The transmission and engine/gearbox cardan shaft were re-aligned. The steering had a logical overhaul of the 8 joints, and the bell-cranks needed specially made (in house) pins, bushes and thrust bearings. The result? A car that steers as the makers intended. The triple SU carburettors were cleaned, a fuel filter added, and the correct needles, followed by a lengthy tuning. The result is a car that now has sufficient urge to tackle motorways, and hills. I am delighted with the work that Guy and the team have carried out, and I can wholeheartedly recommend their services. 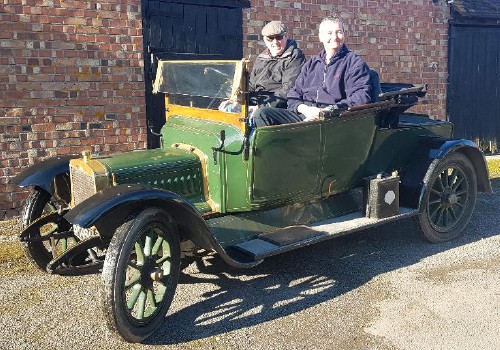 1910 Adler
Thank you for carrying out the engine rebuild on my 1910 Adler. Although I am still running in the engine, it is clear that it has never run better during my forty year plus ownership. Most impressive is that it now no longer overheats, something from which it has suffered for decades. Over and above the workmanship involved, your team has shown great sympathy towards me at a very difficult time of my life. That has not gone unnoticed and has helped enormously to get me “back into the saddle”, so to speak. I can now look forward to happy times spent at the wheel of “Larry” and the occasional Veteran Car Club rally.

Have you used our services?

We'd love to have your feedback

Thanks for your feedback! We’ll be in touch soon.